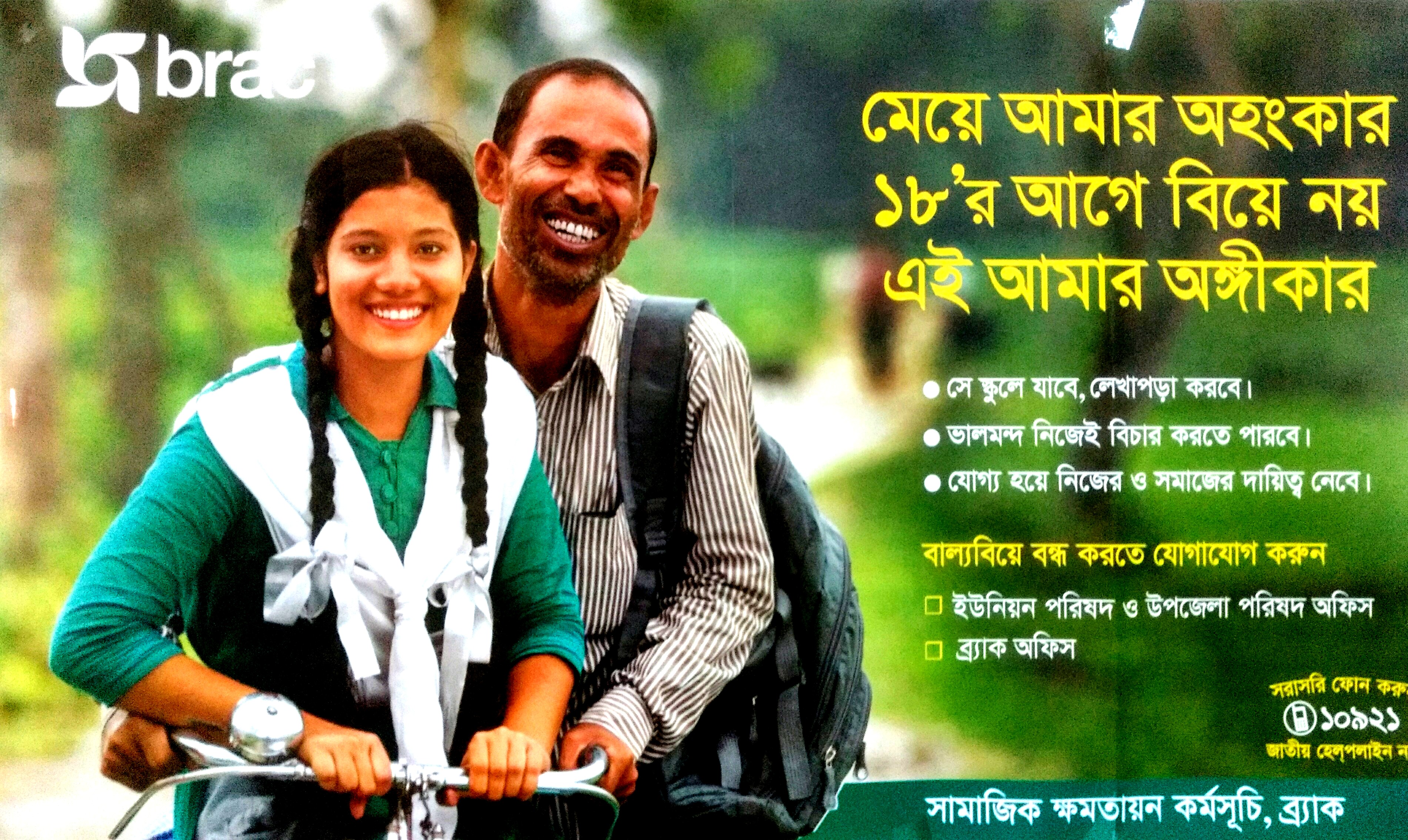 Salim was as usual preparing to go to local field for playing football after returning from school. He suddenly stopped after hearing the conversation of his mother and another woman from the neighbourhood.

“Apa, we have fixed Afroza’s wedding with Kamal from Gaibandha, and it should happen as early as possible.”Afroza’s mother told Salim’s mother.

Salim rushed to Sakib’s house. Sakib is the team leader of the nearby BRAC Adolescent Development Club and told him what he heard.

We saved Afroza. At least for the time being.

But just like Afroza, myriad of girls, especially in rural areas, are still vulnerable to child marriage in Bangladesh, as it is deeply rooted in the social fabric of our villages.

Bangladesh has been a successful case story when it comes to reducing poverty worldwide, but child marriage is still a sore point as recent data from UNICEF shows that child marriage rate of Bangladesh is the 2nd highest among all the countries.

In 2013, BRAC found that Badarganj, an upazilla of Rangpur Division, is the most vulnerable area when it comes to child marriage. Immediately, BRAC decided to run a pilot at this place to prevent child marriage. This pilot, called Ending Child Marriage, has run over two years from 2014-15, which was implemented by BRAC Community Empowerment Programme (CEP) through engaging different stakeholders.

Placing Youth At the Centre

Placing youth at the centre of solution can prove to be critical to prevent child marriage. BRAC formed an Adolescent Development Club to include the adolescents in the development chain.

The club has multiple activities, training and weekly meetups. It sits every three months solely to discuss on the scenario of child marriage in a particular ward. Whenever they see a possible child marriage in their community, like the case of Afroza, they inform the BRAC staffs immediately.

Interestingly, it is a great way to convince the youth on their potential to bring change in their own community.

Designing Campaigns that Work for All

No doubt the protest against child marriage should come from the very stakeholders to make sure the cancer doesn’t return.

BRAC hosted campaigns in 60 schools in Badarganj Upazilla over 2 years, where they arranged debate and quiz competition on topics relevant to child marriage. Most importantly, the parents were also invited to attend these events. On the campaign day, they have also arranged human chain against child marriage in the school premises. Educating students as well as their parents can certainly raise fresh awareness on child marriage.

Looking at Communities for Lessons

It is important to leverage some existing mediums to convey message for the target audience. BRAC advertised the key messages of this campaign on the scroll of the local media channels, especially targeting semi-urban people. BRAC CEP has also staged popular drama using the poplar theatre platform of BRAC CEP in different remote areas of Badarganj Upazilla, having presence of local chairman or government employees, to educate them about the negative aspects of child marriage and inform them about the law.

Categorising Stakeholders by Their Potential to Intervene

There is hardly any stakeholder other than government who can support extensively to troubleshoot any social problem like child marriage. BRAC signed MoU with the government to help BRAC in the implementation phase of this pilot.

There were also some incidents when the police intervened during an ongoing child marriage and forced the both party to postpone the marriage, taking a written undertaking.

Whenever BRAC staffs get notified about child marriage, the local government authority is highly supportive in taking necessary steps to prevent child marriage.

As there is no particular silver bullet for preventing such problems, it is evident from this pilot that engaging different stakeholders can play a strong role to raise awareness in the whole community against social problems like child marriage.